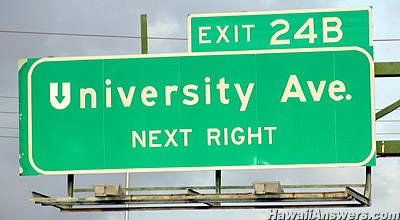 Chances are you’re thinking about the white stickers that you see plastered on street signs — primarily freeway signs and traffic lights — throughout Honolulu. We’ve wondered about those for a while, too. The state Department of Transportation is quite familiar with the symbol, according to their Public Affairs office, but they’re not the ones putting them there. Nor were they familiar with what they meant.

Our first guess was that it is a logo for a surf or skate company or group, as they have a tendency to show up all over public property anyway. And as it turns out, we were right.

As some HawaiiAnswers.com visitors first suggested, and as this subsequent article in the Honolulu Star-Bulletin details, the symbol is the logo of U Down, Inc., an emphatically non-mainstream skate group from Kailua. Before they opened a store in Waikiki, they made skate videos and pulled stunts a la MTV’s Jackass show. The symbol translates to “U Down?” — as in, “Are you down with it?” And the stickers’ placement in precarious, impossible-to-reach places proved that they were.

Being able to get your hands on a U Down sticker used to be a measure of coolness — you had to know Justin McCoy, Micah Kaaihili, Kanoa Somera and David Lau personally. Now you need only go to 337 Uluniu St., Suite 201 to get one. Or a T-shirt, or a cap.