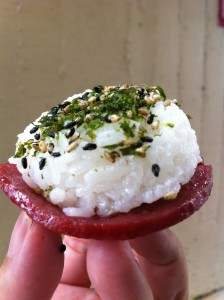 A Göteborg musubi is a scoop of rice nesting in the heat-formed “bowl” of a thin slice of Göteborg sausage (a.k.a. Swedish sausage). It is a food item that originated on the island of Kauai, and is also called “flying saucers” or “UFOs.” An example of Hawaii fusion cuisine, its origins likely go back to the arrival of Norwegian and German settlers during the sugar industry boom in the mid- to late-1800s.